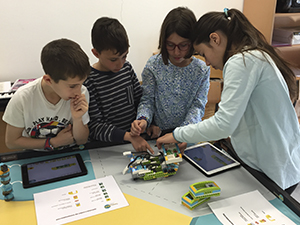 Fundación Prosegur, in collaboration with LEGO® Education, is promoting this environmental education project with the aim of making new generations aware of proper waste management. More than 2,000 Galician students between the ages of 8 and 12 took part in the fourth edition of Planeta Limpio.

This initiative, developed during the academic year 2018-2019 in 15 schools in A Coruña, consists of three phases. In each of them, students learn about the responsible care of their environment, through the use of new technologies, which encourages innovation and creativity among students.

In its first stage, students become engineers for a day to face different environmental missions through workshops in the classroom. For this, they have the support of Lego® Education robots while developing 21st century skills such as collaborative work, problem solving or critical thinking.

During the second phase, the students, organized in teams, face a "Network Challenge", where they must put into practice what they have learned and propose a creative solution to an environmental problem in their environment. The different proposals were published on the project website and a jury chose the most innovative solution. In this edition, the "Melónico 2000" initiative was the winner. The students of the CEIP Ria do Burgo, located in Culleredo (A Coruña), proposed a ship powered by solar energy that recycles the plastics of the sea. This centre has received 4 Lego® Wedo 2.0 educational robotics kits as a prize, with which the school will be able to introduce basic concepts of programming and robotics.

As a final point of the project, during the month of July, Planeta Limpio has developed in Sanxenxo (Pontevedra) awareness-raising activities open to the general public. Among them, the collective construction day stands out in which -with the help of more than 8,000 Lego- the participants contributed their creativity to imagine and build a clean sea of waste.

HOW WE DO IT