Awareness-raising talks for the staff, a day of Volunteering for the Climate and environmental workshops for little foot pupils are the initiatives that we have carried out during this month 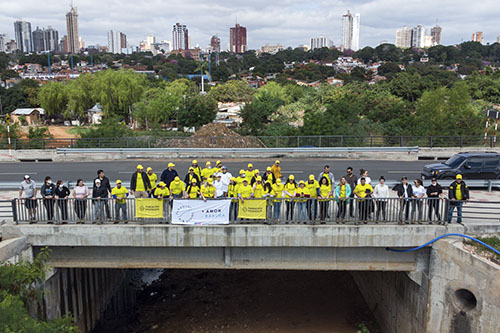 With the aim of supporting, through awareness-raising, our company's commitment to sustainability and care for the environment, we have joined the "Plastic Free July" campaign, in conjunction with the organisation Paraguay Sin Basura (Paraguay Without Waste).

During the first week of the month, awareness-raising talks were held at the Asunción headquarters, with the participation of around 60 employees from different businesses. Two days in which concepts such as circular economy, recycling and tips on how to become a responsible consumer to reduce the waste footprint we generate daily were reinforced.

We also took advantage of these meetings to encourage employees to take action and participate in the first Climate Volunteering day in the country. An initiative in favour of the environment that brought together 70 volunteers to support the cleaning of the Arroyo Antequera in the Costanera de Asunción: a polluted environment that accumulates waste from the capital. Thanks to their commitment, nearly 1,400 kg of rubbish and more than 800 kg of plastics were collected.

The model chosen for this activity was Circular Cleaning, a system that reuses, renews, repairs and recycles waste as many times as possible to reduce its production. After the collection, the company Enerpy Ambiental was in charge of collecting the waste and taking it to its plant. There, the waste will be converted into raw material and transformed into renewable energy, closing the economic circle.

Finally, we have extended this awareness-raising to the students of the San Ramón de Capiatá School, which is part of the Piecitos Colorados Development Cooperation programme, thus closing the environmental awareness-raising activities of the "Plastic Free July" campaign.